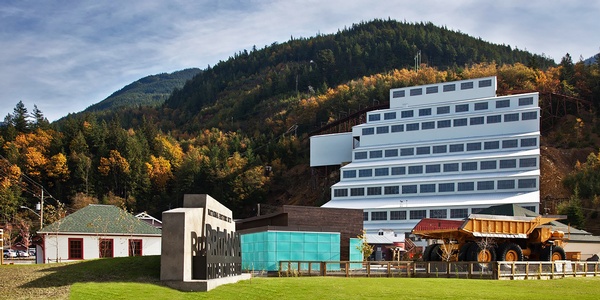 May 28, 2019, Vancouver, BC, Canada – Knight Piésold Canada has been supporting the Britannia Mine Museum for the past seven years and continues to support this National Historic Site, located in Britannia Beach, just north of Vancouver along the scenic Sea-to-Sky Highway. “We recently attended the premier of BOOM! and were very impressed by the Museum’s latest attraction and new theatrical mill show,” said Ken Embree, President of Knight Piésold Canada.

Launching to the public on June 1-2, BOOM!, a live-action special effects spectacle, brings the 20-storey, historic Mill No. 3 building, which is one of the last remaining gravity-fed concentrator mills in North America, back to life. The sensory-thrilling, acoustic adventure transports visitors to a period when the Britannia Mine was booming as the largest copper producer in the British Commonwealth in the late 1920s.

“BOOM! is our newest and biggest production since we relaunched the Museum almost 10 years ago back in 2010,” said Kirstin Clausen, Executive Director of the Britannia Mine Museum. “BOOM! is a creative way of storytelling to share the Britannia story and how instrumental the Mill building was to the community of Britannia and its significance in British Columbia’s history.”

The Britannia Mine Museum, which was opened in 1975 to preserve the material and social history of mining in the province, has become an award-winning, internationally recognized education and tourist destination. The Museum commemorates the accomplishments and ingenuity of Canada’s mining pioneers and showcases the mining industry’s evolution, advances, and achievements. More than 75,000 people, of which around 11,000 are students who participate in school programs that engage in earth science and modern mining, visit the Museum each year.

“Knight Piésold, together with patrons in the mining community, proudly supports the Britannia Mine Museum for preserving the province’s heritage in the industry,” said Embree. “The Museum’s entertaining, experiential programs and exhibits provide an insightful look on how mining plays a crucial role in our society.”

Photo courtesy of Britannia Mine Museum