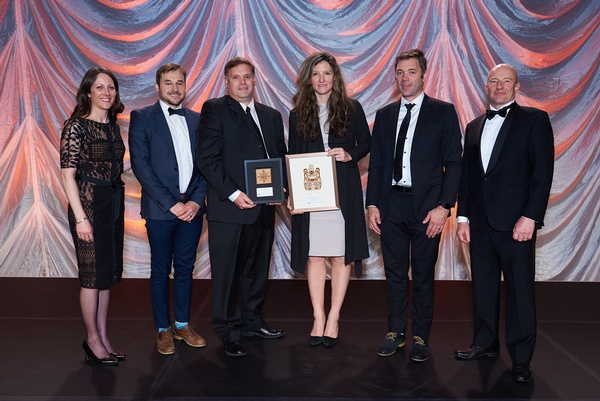 April 10, 2019, Vancouver, BC, Canada – Knight Piésold Canada is honoured to have received an Award of Merit in the Energy and Industry category for the Azambi Hydroelectric Project. The Association of Consulting Engineering Companies British Columbia (ACEC-BC) presented the award at the 30th Annual Awards for Engineering Excellence Gala, held on April 6, 2019 at the Westin Bayshore Hotel in Vancouver.

Out of 41 submissions, ACEC-BC presented awards for engineering excellence to 14 projects under seven categories, recognizing the innovation and technical excellence of member firms. “The Awards for Engineering Excellence winners represent the best and brightest in our industry,” said Caroline Andrewes, President and CEO, ACEC-BC. “The winning projects are some of the most impressive work we have seen from B.C.’s consulting engineers, who have been showcased on this stage for the past three decades.”

The 11 MW Azambi Hydroelectric Project is located in a remote area of the Haut-Uele province in the Democratic Republic of the Congo. The Kibali Gold Mine, which is operated by Barrick and owned by a joint venture company composed of Barrick, AngloGold Ashanti, and Société Minière de Kilo-Moto, has developed the project to support the increasing power demands of one of the largest gold mining operations in Africa.

The project, which was successfully commissioned in July 2018, produces approximately 64 GWh of renewable, reliable electricity each year to power the mine. It reduces the mine’s overall energy cost by approximately 75 percent and cuts its reliance on diesel fuel generation—equivalent to US$19.2 million per year in savings. A portion from the mine’s power grid capacity is provided for free to local communities, reducing their reliance on deforestation for energy supply. The project will ultimately become a legacy asset for local communities once the mine has reached its end of life.

“The Azambi Hydroelectric Project demonstrates the effective use of Africa’s vast hydro potential to boost power reliability in remote areas, specifically for the mining industry and surrounding communities,” said Sam Mottram, Managing Principal of Knight Piésold Canada. “Knight Piésold is proud to have been a part of a collaborative team, successfully developing hydropower in Africa and for future generations.”