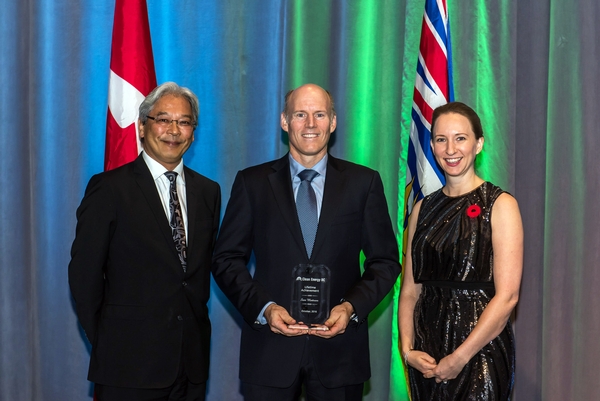 November 21, 2016, Vancouver, BC, Canada – Sam Mottram received a Lifetime Achievement Award at the 2016 Clean Energy BC Awards, held on November 7th during the GENERATE 2016 conference in Vancouver. Mottram, managing principal of power services at Knight Piésold Canada, accepted the award from Clean Energy BC’s Colleen Giroux-Schmidt, chair of the board of directors, and Paul Kariya, executive director, who described his impact on the renewable energy industry in the province.

Originally from a small farming community in KwaZulu-Natal, South Africa, Mottram received his undergraduate and graduate degrees in civil engineering from the University of Natal (now University of KwaZulu-Natal). He started his career designing hydroelectric projects throughout Africa, including working in remote locations in South Africa, Uganda, Burkina Faso, and Mali.

Specializing in project concept development and optimization, Mottram has more than 20 years of experience in the management, design, and development of over 100 small- and large-scale hydroelectric and water infrastructure projects in North and South America, Africa, Europe, and Southeast Asia. He continues his passion in helping power Africa with renewable energy, and is currently working with the Knight Piésold team on active hydroelectric projects in Zambia, Democratic Republic of the Congo, Sierra Leone, and South Africa.

Clean Energy BC, an association representing local, small-scale, clean-power producers in British Columbia, awarded individuals and companies for outstanding achievements in the industry. Among those awarded were projects that Knight Piésold was involved in, including:

Photo courtesy of Clean Energy BC.