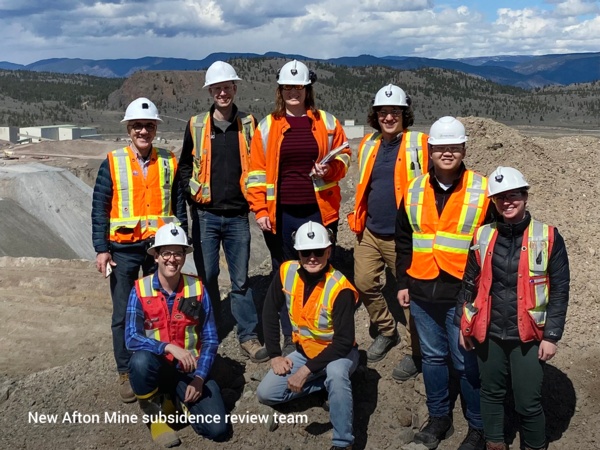 September 20, 2022, Vancouver, BC, Canada – Kevin Davenport, a senior engineer at Knight Piésold Canada, presented a case study on observed block cave subsidence progression at Caving 2022, the Fifth International Conference on Block and Sublevel Caving. The conference, which was hosted by the Australian Centre for Geomechanics, was held in Adelaide, Australia on August 30 to September 1, 2022.

The paper, “Observed subsidence progression at New Afton Mine in response to Lift 1 mining,” summarizes the spatial and temporal manifestation of subsidence deformations and key factors influencing deformation rates and/or subsidence zone extent, using examples from the numerous instrumentation and monitoring techniques used at the New Afton Mine. It was developed in collaboration with Corey Camp of New Gold Inc. and Graham Dick of BGC Engineering Inc.

The New Afton Mine, owned by New Gold Inc., is an operating gold-copper block cave mine in British Columbia, Canada. Mining of an initial Lift 1 block cave, approximately 600 m below ground and partially beneath the historical Afton Pit, began in September 2011 and was completed in early 2022. A state-of-the-art subsidence monitoring program has been implemented at the mine to monitor surface and near-surface deformations resulting from mining, including progression of subsidence towards critical surface infrastructure. Breakthrough of caving to surface and initial subsidence deformations were monitored in February 2013, followed by subsequent deepening and expansion of the subsidence zone with continued Lift 1 mining. Observed surface deformations were found to be influenced predominantly by mine production rates and the location(s) of underground draw. Additional controls on the expansion of the subsidence zone and the spatial distribution of deformation rates included influence of topography, confinement within major geological structures, preferential deformation within weaker geological units, and interaction with pre-existing pit slope instabilities within the historical Afton Pit.

“New Afton Mine subsidence is rigorously monitored using an extensive network of instrumentation and remote sensing techniques, including systems at the forefront of geotechnical instrumentation technology, due to the proximity of critical surface infrastructure,” said Davenport. “This intensive approach provides a comprehensive dataset beyond what is typical of subsidence monitoring at most mines, allowing a highly-detailed perspective on subsidence progression and facilitating cross-validation of findings between techniques.”