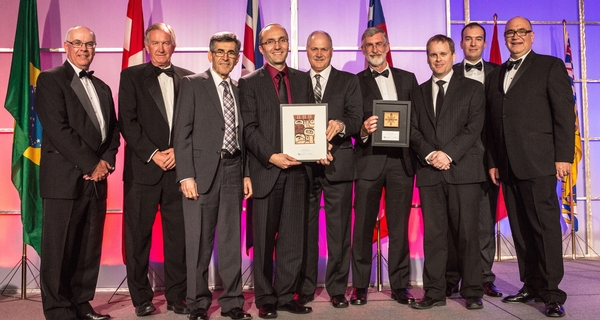 April 15, 2016, Vancouver, BC, Canada – Knight Piésold Canada was honoured with an Award of Merit in the Energy and Industry category for the Capilano Energy Recovery Facility. The award was presented at the annual Association of Consulting Engineering Companies British Columbia (ACEC-BC) Awards for Engineering Excellence Gala on April 9, 2016 at Fairmont Hotel Vancouver.

“The Awards for Engineering Excellence winners represent the best and brightest in our industry, and the winning projects are some of the most amazing work that we have seen from B.C.’s consulting engineers, who have been showcased on this stage for 27 years now,” said Keith Sashaw, President and CEO, ACEC-BC.

The Capilano Energy Recovery Facility is a vital link in Metro Vancouver’s Seymour-Capilano Water Filtration System that supplies treated potable water to the cities of Vancouver, North Vancouver, and Burnaby. It is located adjacent to the Capilano Reservoir and Cleveland Dam, at the terminus of a 7-km-long, gravity-driven tunnel from the Seymour-Capilano Filtration Plant (SCFP). Excess pressure is created when treated potable water from the SCFP—located 30 m higher in elevation—passes through the tunnel for delivery to the Capilano distribution system.

Knight Piésold designed and commissioned the facility to provide reliable water continuity and dissipate excess pressure in clean drinking water before it is delivered to residents and businesses in the cities. A hydroelectric turbine converts excess pressure and flow to electricity to recover energy that otherwise would have been lost. Two pressure reducing valves (PRVs) dissipate excess gravity-fed water pressure. The turbine and PRVs discharge into a large underground concrete break head tank, connected to the city water mains, to maintain a constant water supply level in response to varying demands from consumers in the cities. In the event of system failure, a dechlorination system delivers a metered dosage of calcium thiosulphate to neutralize residual chlorine in the water before it is discharged into the Capilano Reservoir through an emergency overflow channel, making it safe for aquatic habitat.

The facility has one of the largest energy recovery turbines in a municipal treated potable water system in North America. The turbine is expected to generate energy equivalent to powering up to 1,000 homes. The energy is instead used to partially offset the consumption of the large pumps in the Capilano Pump Station, reducing Metro Vancouver’s energy consumption by approximately 9,600 MWh/year.

Knight Piésold is proud to have worked with Metro Vancouver, subconsultants, and subcontractors since the project’s inception and is grateful to finally see it to completion after 13 years. For more information on the project, connect with Rob Adams, P.Eng., Specialist Hydromechanical Engineer.