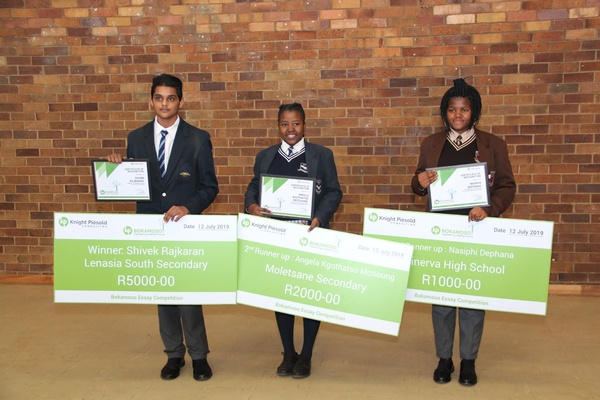 July 22, 2019, Johannesburg, South Africa – Knight Piésold Southern Africa launched a creative essay writing competition for no-fee and partly funded high schools across Gauteng, South Africa in March 2019. This competition is part of Knight Piésold’s Bokamoso Programme, which is committed to improving the lives of future generations, and aims to give high school students in Gauteng the opportunity to let their talent shine through creative writing.

Knight Piésold is mindful of the challenges facing so many schools and students and recognizes that it is vital to remember the history of South Africa and to pass on lessons learned to the next generation. In this way, students can build a culture of humanity, respect, and unity in the country.

The company launched a creative essay writing competition on the topic: “Looking back, Moving forward, My Dream, My South Africa.”

Regional Manager Vishal Haripersad believes that it is important to help the youth understand that success is within their reach and this can be achieved through hard work, dedication, and support from the community.

“There is no shortcut to success,” Haripersad passionately stated. “We are working together with stakeholders that include the public, businesses, and the government to create a culture of respect, performance, and hard work. We have asked ourselves what we as a community should be doing to create the future we want to see and have implemented various initiatives to achieve this goal.”

The winners and runners-up were announced in an awards ceremony held at Jabulani Technical High School in Soweto on July 12, 2019. With over 40 essays received from 12 high schools within Gauteng, six students were shortlisted and invited to recite their essays at the awards ceremony.

Winner, Shivek Rajkaran from Lenasia South Secondary, walked away with the biggest prize of R5000 as well as an investment of up to R100000 that will go towards the school’s math and science equipment. Second place went to Angela Kgothatso Motloung from Moletsane Secondary School in Soweto (R2000) and third place went to Nasiphi Dephana from Minerva High School in Alexandra (R1000).